Learning Classics is a bit like putting on a magic pair of 3-D glasses. Once you start delving into the language and the culture, you'll start to see it all around you. This blog is a record of the club's journey through the worlds and language of ancient Rome and Greece... and through modern times, too, searching for the influence of classics all around us. You'll also be able to find vocab, home tasks, links and generally enlightening info here, too.

These last two lessons, we've taken a slight departure from our usual lessons. We're close to the end of term and our time together in Classics Club 😢 so we're thinking a bit about next year. Time to meet these guys...
Say hello to Caecilius, Metella, Quintus, Clemens, Grumio and the mighty Cerberus - characters from the Cambridge Latin Course. If you carry on with Latin in Y8, you'll find out all about their lives and (spoiler alert!) deaths in the Roman city of Pompeii.


If you're interested, you can visit https://www.clc.cambridgescp.com/books/book-i. Have a great summer!

You can't study Classics without at some point coming up against the Greek and Roman gods. They seem to get involved everywhere in human stories, both ancient and modern. So, after a quick game of Name That Deity (bonus points for getting both Greek and Roman names), we had a go at filling in their family tree.

Actually, we concentrated mainly on the Olympians (highlighted in green on the family tree, and named after their home on Mount Olympus), but we also explored the Titans (the generation before the Olympians). Devon astounded us with his knowledge of the Titanomachy ('Titan battle'), where Zeus and his brothers overthrew the previous generation. But hold up a minute, don't we know that sometimes myths tell us something about the world around us, including human nature? So a myth that talks about a younger generation getting angry with the older members of their family... perhaps this is one way the Ancient Greeks recorded and explained the natural phenomenon of teenagers rebelling against their parents. I mean, if Zeus got mad at his tyrannical father, isn't it normal that adolescent humans do, too? Mind you, from the evidence of this video, I wouldn't want to take on Kronos (I think I'd just get on with my homework/chores):

Moving on from democracy (and psychology!), over the last two weeks we've been looking at another thing for which the Ancient Greeks are rightly famous: 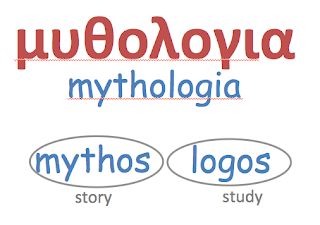 We kicked off with a quiz, identifying Ancient Greek mythological characters and their modern-day descendants. Then, always keeping an eye on the modern as well as the ancient, we investigated why these intriguing and often scary tales play such an important part in so many cultures.

We all agreed on Mormo and Father Christmas as tales used to keep naughty children in check. There was also consensus on mermaids and the Taraxippi as myths that helped explain natural phenomena. However, the debate got very lively when it came onto the origins of UFO stories. Some of us bought into the fact that these stories tap into human physiology (sleep paralysis) and psychology (addressing our deepest fears), and perhaps even controlling the masses, but others argued that they weren't myths at all, but true accounts of actual events.

In language work, we continued our mythological theme, looking at the 'Metmorphoses', Greek myths written down in poems by the Latin writer Ovid. Specifically, we looked at the myth of Icarus (which you already knew in such detail - awesome!). We played a game of Word Roots Challenge using a section of the poem, and then we translated a simplified Latin version of the myth.

And, as promised, if any of you want to re-watch that clip of Odysseus (a.k.a. Nobody) outwitting Polyphemus the Cyclops, here you go: